I've come across an excellent website named The Shipwrecks of Cork Harbour which I highly recommend to anyone with even a passing interest in all things maritime, local history and Cork Harbour in particular. It's not just shipwrecks but also the story of the harbour's naval tradition and sealife too.

Posted by Carrignafoy at 19:49 No comments:

As you can see, my New Year resolution to keep this blog updated regularly went with most other such resolutions and I haven't posted here for a full two months!

I'm making no rash promises now, but I have something to post at last!

The Port of Cork cruise liner schedule has been published and is available on the port company's website at .

Once again it looks like a great year for liner visits with over 50 confirmed already including the Cunard line's new Queen Victoria and two visits from Royal Carribbean line's Independence of the Seas. Most of the ships are, as usual, coming to the cruise liner terminal at Cobh's Deepwater Quay. (NOTE: the car park beside the Deepwater Quay is currently full of huge water-filled potholes, someone needs to take note!).

Other port activity includes the long-awaited return of a direct car ferry service between Cork and the UK. Originaly due to start on March 1st, the arrival of the mv Julia has been postponed for a week as the ship isn't quite ready yet. The new service is a very welcome development - better late than never!

Last, but not least, a very welcome return of some good weather (by late February standards). It's still cold but it's good to see the sun shining after such a cold and wet winter!
Posted by Carrignafoy at 11:23 No comments:

Thanks to all the regular visitors and "fans" of the Old Blog Cabin for bearing with me during the last year or so of relative inactivity. I will try to post more often in the New Year.

I would like to wish all of you a peaceful and joyous Christmas and a Happy New Year. In particular for those of you who will be at sea or tied up in a port far from home over the festive season I wish you the traditional Beanachtaí na Nollaig (Christmas Greetings in the Irish language) and safe return home soon to friends and family no matter where they may be.

Finally if you'll be in Cobh or Cork Harbour over the Christmas / New Year season you'll find plenty to do in this link which I should have posted much sooner.
Posted by Carrignafoy at 12:13 No comments:

Liam Clancy - Home from the Sea

I'm posting this for no better reason than to pay tribute to the late, great Liam Clancy who died earlier this week. This is one of his most popular songs and one which all seafarers can identify with.

Cork's maritime past comes back with a bang 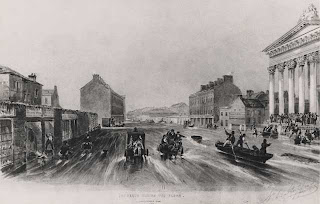 The City and County of Cork got a sharp reminder of its maritime heritage over the past week with the worst floods in living memory.

The people of Cork are no strangers to flooding, but the floods which began on Thursday 19th November were something different. Cork was not the only place affected. The floods extended over a large area of Ireland and our neighbouring island, but Cork was one of the most badly affected areas in Ireland.

Cork city is built on a marsh, known in Irish as Corcach mór na Mumhan, the Great Marsh of Munster. The city centre is a series of about six islands and lots of smaller ones which have been drained and channelled. The main street of the city, St. Patrick's Street, was once a channel of the River Lee and much of the city centre is barely above high tide mark. Other streets that were previously waterways include the South Mall, Emmet Place and Drawbridge Street. When a combination of heavy rain of the type we had last week conspires with high tides and high winds the city gets flooded. What we got last Thursday could be called "the Perfect Flood". Except for those affected by it, who would call it something different.

Over 400 years ago the English poet Edmund Spenser wrote about the nature of Cork city in his epic poem The Faerie Queen, "The spreading Lee, that like an island fayre, Encloseth Corke with its divided flood".

The picture above shows Washington Street (then known as George's Street) at the height of the great flood of 1853. The same flood partially washed away St. Patrick's Bridge, not long after its predecessor had been washed away completely by another flood. Thankfully that didn't happen in the 2009 floods, although two people perished in Britain, one of them a police officer swept away when a bridge collapsed.

It all goes to show that we cannot take the planet upon which we live and its environment for granted. There is an interrelationship between the environment and those things we build on it. If you divert water from one place it must re-emerge somewhere else. Global warming is a reality and it is a fact that some of the wettest (as well as some of the warmest) years this century have taken place within the last two decades.

There is no doubt that more and more money is going to have to be spent on flood protection over the next few years. In some countries it is far more severe with places such as Bangladesh in dire trouble and large scale moving of people and cities may have to take place (except the developing world is turning a blind eye).
In places like Cork we are likely to see even more floods and other unusual weather phenomena. We seriously need to get prepared for them.
Posted by Carrignafoy at 06:16 1 comment: