Earlier this week it was annouced that the Cork Docklands development was going to the planning authorities within the next week. The proposed development is nothing new - it has been on the drawing board for the last six or seven years - but it is now one step nearer to becoming a reality.

The plan will cost in the region of €2 Billion (that's €2,000,000,000) and will include a 30 storey high appartment block and an "iconic building" which will house a restaurant run by a "world renowed chef" and some 600,000 square feet of office space. It will also involve moving the existing city dock business and the oil terminals on the Marina downstream. 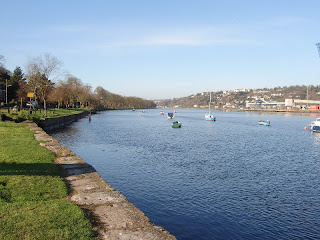 Now I would be the first to acknowledge the need to do something drastic with the existing docks. I grew up only a few hundred yards from them and I have strong memories of the smell of fertilizers and chemicals coming from the docks and the nearby Goulding's factory. There were days on which you simply could not open a window, no matter how warm it was, because of the sulphrous air which caught in your throat.

However it strikes me that a lot in this plan is taken straight from the Dublin Docklands development which is itself based on the London Docklands developed under Maggie Thatcher. The term Yuppieland comes to mind.

Part of the proposal is a metro line through the centre of the development. Now excuse me but the last time I went along the Marina it was a pleasant walk on completely flat ground. There are parts of Cork in far greater need of a proper public transport system.

I'm not against the development of this area but I feel it should be a more mixed development - without the high-rise and that the area present east of the Marina ESB power station (the start of the Marina where the old "20 to 1 gun" is located and the area near Pairc Ui Chaoimh stadium) should not be included in the plan - they are part of the Marina, not docklands.
Posted by Carrignafoy at 11:19 No comments:

I'm back from the hols and find that the debacle over the Cork to South Wales ferry is still rumbling on with conflicting news from different camps. Minister Micheál Martin says there is hope for a new service - but it needs public money. Nothing about the hundreds of thousands pumped into Swansea-Cork Ferries to start it up and no accountability. No way! The best thing that could be done now is for the local authorities to establish a new ferry company and this time that it should remain with a majority of shares in public hands. Let the business interests put their money where their mouths are.
Posted by Carrignafoy at 11:31 No comments: