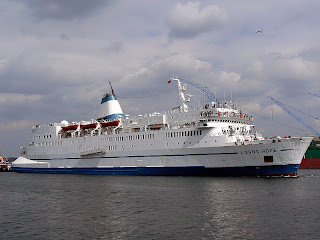 My apologies to all my regular readers (if there are any left) for my long absence over the past two months. I have been busy with other projects and neglected my maritime blogging. But now I'm back.

I was looking out my window yesterday looking over Cork Harbour when I spotted an unusual ship. It looked a bit small for a cruise liner of which many come to this port and while it was in good condition it wasn't the gleaming type of vessel you'd normally associate with that trade. It seemed more like a car ferry so my next thought was, has the Swansea-Cork replacement ferry finally arrived at last? Alas it was not for when the ship got nearer and I saw the name "Logos Hope" all hope receeded in that quarter. I quickly consulted an online shipping register and discovered that the Logos Hope is operated by a Christian group and travels around to different ports to spread the Gospel. She is in Cork until July 14th so presumably the evangelists will be in evidence around J.J. Horgan's Quay where she is berthed.

The ship has an onboard theatre which can seat up to 1,000 people at a time. I'm not sure whether they can expect to get crowds like that in Cork but apparently there is a demand for this kind of thing.

A former car ferry which previously operated between the German port of Travemünde and the Swedish port of Malmö she weighs in at 12,000 tonnes and currently flies the Faeroe Island's flag. She was built in 1973.
Posted by Carrignafoy at 09:28 No comments: