The Cobh Maritime Song Festival kicked off last night with a concert in the Sirius Arts Centre and the festivities continue throughout the weekend, along with the South of Ireland Pipe Band festival, the Farmer's Market, etc.

I didn't get down last night for the opening, but no doubt I'll sample the music and atmosphere over the next few days.

The video above is of the French group Nordet who will be performing in Cobh over the weekend. (see the festival website at for further details).

Below are the lads from Perły i Łotry of Poland singing "The Boys of Killybegs" at a Shanty festival in Langesund, Norway in 2006. By the way Perły i Łotry means "Pearls and Rascals".

It should be a great weekend in Cobh!
Posted by Carrignafoy at 08:27 No comments:

Some news on ferry front, but not this year...

I got an interesting e-mail from the Save the Swansea-Cork Ferry campaign yesterday. Apparently the South West almost secured a ship which would have allowed for the restoration of the link between Cork and South Wales, but were just beaten to it by a Russian ferry operator. While this is disappointing, it does at least show that people are trying to do something about the service.

It's that time of year again and the Cobh Maritime Song Festival 2008 is fast approaching.

This year's festival takes place on 30th and 31st May and June 1st and promises to be bigger than ever with headline acts including Martin Hayes and Dennis Cahill, Patrick Street, Martin Collins and Jimmy Mageean, Nordet from France, Perły i Łotry from Poland, Fore 'n Aft from England and the Johnson Girls from England.

The weekend will also feature the Ocean to City (boat) Race on Saturday and the South of Ireland Pipe Band Competion in the town centre on Sunday, 1st June.

More details of the festival are available on the Cobh Maritime Song Festival website at
Posted by Carrignafoy at 11:04 2 comments: 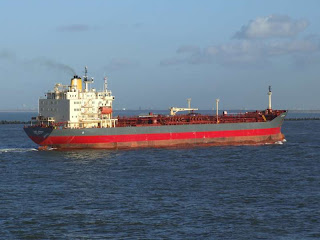 
Conditions onboard a bulk cargo ship which docked at Ringaskiddy deepwater port in Cork Harbour this morning (10/05/08) are nothing short of appalling. The 170 metre long Lady Chiara (IMO Registration No. 8406327) is reportedly carrying a cargo of molasses but she is registered as an oil and chemical tanker. Molasses is a food product derived from sugar cane and is usually used here in animal feeds.

Reports on today's 1pm news on RTE Radio 1 stated that some of the ships crew had called for assistance from trade unionists which led to a visit by the Irish agent for the International Maritime Federation, Mr. Ken Fleming. It is said that some of the crew's meagre food store is more than a year out of date and and more of it is stinking and rotting while general conditions on board are extremely bad. We hope to have more information soon.

This once again highlights our call for action by the Irish government and European Union on "Flags of Convenience" ships. Lady Chiara is registered in Liberia, which has long been recognised as a Flag of Convenience country.
Posted by Carrignafoy at 12:57 No comments: 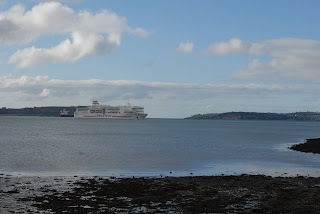 Yesterday saw the launch in Cobh of the much-vaunted Cork Harbour Integrated Management Strategy. The title is a bit of a mouthful and all it's short is the word "protection" after management and it would gain the acronym CHIMPS, but as it is CHIMS promises much. The question Cork Harbour residents and users are asking is, will it work?

The strategy is aimed at bringing together all the stakeholders in Cork Harbour together in a forum and planning the management and future of the harbour. According to the blurb on their press release, "Cork Harbour is a unique resource and presents very real management challenges associated with, for example, flooding, water quality, industrial expansion, environmental protection, marina development and recreational usage. This Strategy is based on a voluntary partnership between key management agencies and local stakeholders including Port of Cork, Irish Naval Service, Local Authorities, Government Departments, Chamber of Commerce, Failte Ireland, community development agencies and the IDA".

Now surely the most important stakeholders in Cork Harbour are the residents of the area and it is to be hoped that their views will be taken fully onboard and that regular public forums are available to them when the future of the harbour is being discussed. Obviously the Old Blog Cabin would like to see this strategy given a chance to prove that it is more than a glossy document and that it becomes meaningful to the residents of the Cork Harbour area. We shall see.

There is a website at www.corkharbour.ie where you can download the Cork Harbour Integrated Management Strategy for yourself.
Posted by Carrignafoy at 09:31 No comments: