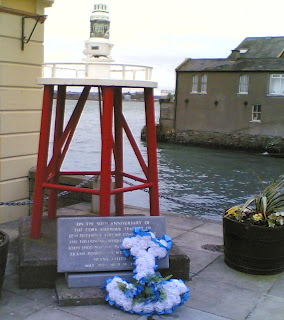 Today the Cork Harbour Pilots are based at the pilot station in Cobh and have two modern pilot launches, the Gleánn Mór and the Sonia (the latter named after champion Cobh athlete Sonia O'Sullivan). In addition to radar they also have access to closed circuit television cameras which cover the entire harbour as far as Cork city quays and AIS (Automated Information System) which all ships must now carry and which gives the exact position, heading and other live information about the ship. I have included some video of the newest launch, the Gleánn Mór working in rough seas. Incidentally the Gleánn Mór is an Interceptor 42 (42ft long) specially designed as a pilot launch and built by Cobh based Safehaven Marine.
Posted by Carrignafoy at 08:22 3 comments: 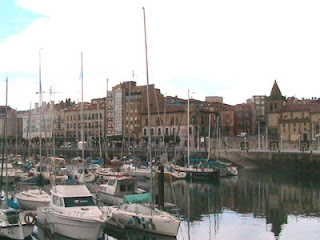 On a more positive note there was news recently of a move to open a ferry link between Cork and Northern Spain with a Ro-Pax (Freight & Passenger) ship linking Cork with the port of Gijón (pictured) in the province of Asturias which is well connected to the rest of Spain by motorway. So far it's only on paper but the Old Blog Cabin hopes that it will become a reality and not just a pipe-dream which the Swansea-Cork ferry appears to be. We live in hope.
Posted by Carrignafoy at 08:55 No comments: 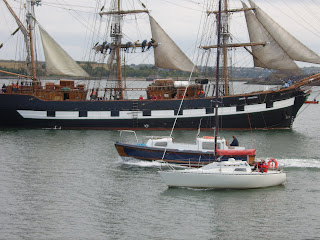 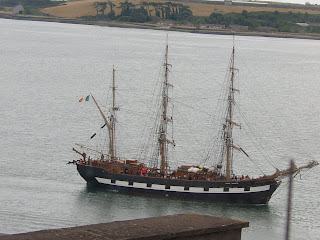 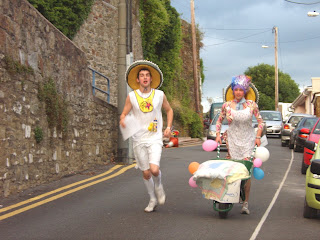 It's almost Regatta time again and this year's Cobh People's Regatta opens on Friday 8th August with a full programme of events over the weekend. (my apologies as I originally said it was the Bank Holiday weekend, in fact it is the following weekend 8-10th August).

There's a lot more to the Regatta weekend than rowing and sailing but the regatta, one of the oldest in Europe, has plenty to offer for all - plus some challenging boating skills trials. 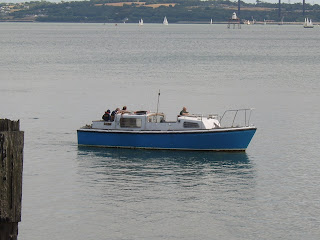 the Regatta kicks off on Friday at 2.30pm with the Cobh Youth Busking Competition followed by the "Streets of Cobh" Race led by Ballymore Cobh Athletic Club and the ever-popular Wheelbarrow Race from the Main Stage in front of the Cobh GPO to the Top of the Hill - and if you're not familiar with that part of Cobh it is some climb, more of a mountain than a hill.

There will be plenty of live bands playing over the weekend, not forgetting the all-important racing events and the Festival Queen competition.

The full programme of races and other events can be found on the regatta's website at The official Regatta programme in printed form is available in local shops and other retail outlets at €2. 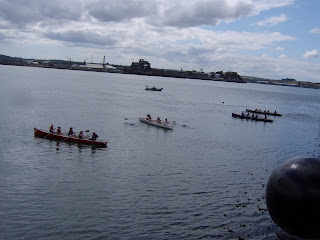 Since the news broke last week the media has been full of stories about the toxic slag heap on and beside the former Irish Steel / Irish Ispat site on Haulbowline - a few hundred metres from the town of Cobh and close to many other harbour towns and villages. 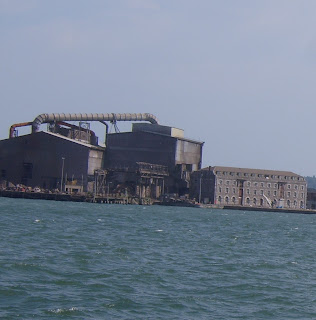 Photo shows former furnace hall which was demolished in 2006 causing a huge dust cloud which spread over much of Cobh and the lower harbour. Below is a video of the demolition


It has emerged that a company employed to remove the slag heap has been sacked by the government and has leaked a report which shows that the situation is much worse than thought and there are dangerous levels of lethal toxins such as Chromium 6 and mercury on the site. It was not news the government wanted to hear and now the lawyers are being called in to sort out the legal wrangle. Meanwhile the people of the lower harbour and the 1,300 members of the Irish Naval Service continue to live, work and play beside the site.

On July 1st local resident's and environmental group's representatives met with the Minister for the Environment John Gormley in his Dublin office. The usual press releases were issued by both sides, the most embellished being that of the Minister which was aimed at allaying people's concerns and dampening down the furore. It's called public relations and people like John Gormley are good at it.

The furore should not end, the anger of the people of Cobh and the lower harbour needs to become even more obvious. We want action, we want answers and we want them now!

Tonight even more bad news, the Evening Echo (02/07/08) reports that statistics from the National Cancer Registry show that cancer levels in the town of Cobh are 44% above the national average. We didn't need a statistical analysis to tell us that is very high, but the extent of it is a shock. Higher cancer rates are also found in Carrigaline, Ringaskiddy and Passage/Monkstown - but Cobh Urban is by far the worst.

Irish Steel - or Irish Ispat as it became known when it was sold off for the princely sum of one old pound (IR£1) by the Fine Gael / Labour / Democratic Left government - it finally closed in 2001 - that was seven years ago. High levels of toxicity at the site were first reported ten years before that in 1991. This is half way through 2008 and it's still there. Deadly carcinogens in pools, on the ground on Haulbowline and in the air we breath - and of course also leaching into the waters of Cork Harbour where many of us swim, paddle or travel by boat for work or pleasure.

What has occurred in Haulbowline is a crime. Criminal negligence has put the lives of Irish Steel workers, clean-up contract workers, naval service, port workers and the local people at serious risk. There was also a criminal attempt to hide the extent of the situation. Will we see anyone go to jail? - Highly unlikely. Will any senior official or government minister be disciplined ? - Very unlikely. Will any of those who have suffered death or serious illness as a result of thes toxins (or their families) ever receive compensation? Don't hold your breath. Will the site ever be properly cleared? We will wait and see - but let's not wait too long. In fact we now need to ensure that the issue stays on the national agenda. Don't be silent! 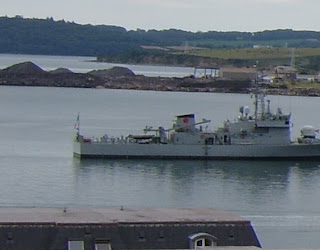