Navigator of the Seas 04.06.07 013
Originally uploaded by Carrignafoy
This was the departure of the cruise liner Navigator of the Seas from Cobh last year. Her visit brought thousands of people to the harbour town and there was traffic chaos for a while. Next month, 3-4th May 2008, her even larger sister ship the Independence of the Seas arrives in Cobh on her maiden voyage. My advice to anyone coming for a look is get there early!
Posted by Carrignafoy at 20:59 No comments: 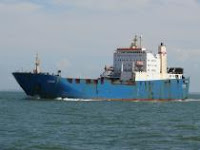 It seems to be a case of saying one thing and doing another.
Posted by Carrignafoy at 08:04 No comments:

Glad to report that the brig Roald Amundsen has safely reached the Belgian port of Ostend this afternoon (Easter Sunday), docking at 14.30hrs local time (see previous stories). I have been following her progress on the German Sail-Training Association's webpage at http://http//www.sailtraining.de/index.php?id=28&L=1.

I'd also like to share with readers some of the shipping and maritime sites I have been enjoying recently. Shipspotting.com is a very interesting site for anyone interested in the sea and things maritime. It has more than half a million photographs posted by site users. It's free and can be found at http://www.shipspotting.com/

AIS, that's Automated Information Systems, is a relatively recent development. All ships must now carry a radio transponder which allows their position to be plotted by harbour authorities and other mariners. The system is quite cheap and you can buy your own AIS detector for a few hundred Euro and connect it to your PC allowing you to see real-time positions for ships in your vicinity. Linked up to the internet it becomes the equivalent of air-traffic control for ships. Luckily many internet sites are now offering a version of online AIS. One I discovered recently is http://aislive.com/ - for a free sign-up you can see ships positions for all of northern Europe on your computer screen. The free version shows you an hour behind but if you sign up for the premium service, which is still very inexpensive, you can see the actual position of ships in every major harbour in northern Europe (and a few others) in real-time. 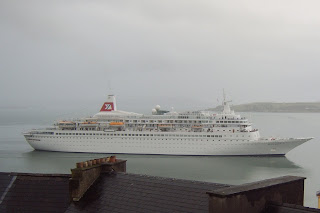 The Cork Harbour cruise liner season starts next week with the arrival of the first of more than 50 liners which will visit the port in 2008 - most of them docking at Cobh's cruise liner terminal at Deepwater Quay. The first arrival will be the Black Prince of the Fred Olsen line which will arrive next Sunday, 30th March around 07.30hrs. She and her sister ship the Black Watch have been regular visitors to Cobh over the last few years. The photo here is one I took of the Black Watch in 2006.
Posted by Carrignafoy at 19:53 No comments:

"Gute Reisen", the German equivalent of Bon Voyage or Slán Abhaile, is my message to the crew of the sail training ship Roald Amundsen as she sails towards Ostend, Belgium on her way home to Germany after surviving last week's severe weather off the southern coast of Ireland.

Unfortunately my camera was not to hand this lunchtime as Roald Amundsen passed the town of Cobh on it's way out to sea but it is to be hoped that they will have a much more pleasant journey than their trip here from Lisbon last week. While the weather will include winds of up to Force 6 tonight it will still be much less than the Hurricane force 12 they experienced 7 or 8 days ago. After a brief stay at Ostend, Roald Amundsen will soon be rolling home to her homeport of Eckernförde in Germany's Western Baltic, close to that country's border with Denmark.

We wish them a safe voyage.
Posted by Carrignafoy at 16:53 2 comments:

Nice to see the Pont Aven back again 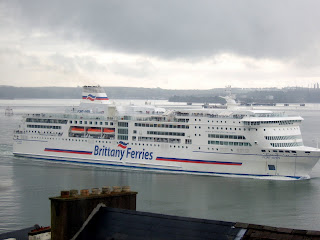 The Brittany Ferries Cork-Roscoff service is back again after its Winter break and it was nice to see their flagship Pont Aven pass Cobh again this morning on its way to berth at Ringaskiddy.

No doubt passengers are glad that they escaped the severe weather we had earlier in the week but winds were still strong this morning with heavy rain as Pont Aven sailed by my window, looking well with her new paint job. The photo here is from 2006 though.

Unfortunately the much promised return of a ferry link between Cork and Wales has failed to materialise for a second year.
Posted by Carrignafoy at 11:46 No comments: 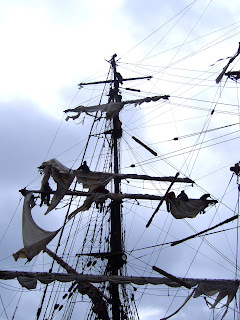 The German sail-training vessel Roald Amundsen is in the Irish port of Cobh after 11 of its 18 sails were ripped to shreds by hurricane force winds off the south coast of Ireland (10-12th March 2008). This morning crew members were working to replace the torn sails after several days of severe weather on a voyage from Lisbon, Portugal to Cobh, Ireland.

At one stage the ship's own instruments recorded gusts of 99 knots (114 miles per hour) and the damage to the little ship's sails was plain to see in Cobh this morning (Thursday 13/3/08).

Luckily none of the 41 strong crew, including 15 trainees were injured but the ship's captain Christian Delamotte is reported in the Irish Examiner newspaper today as saying it was the worst weather he had ever encountered in 30 years at sea. The 252 tonne brig Roald Amundsen has her home port at Eckernforde in Germany. She is due to leave Cobh for sea on Monday 17th March. 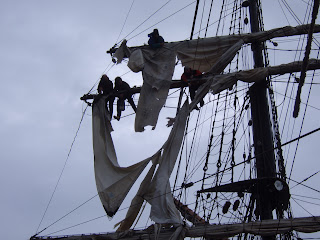 Below is a link to the ship's English language web page. 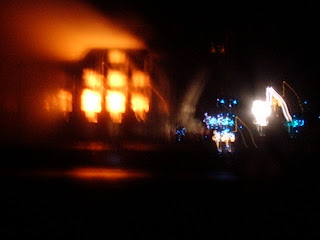 Several units of the Cork County Fire service from Carigaline and Crosshaven were joined by units from Cork city and a fire-fighting tug from Cobh in an attempt to control the fire which was fanned by gale force winds. The Cork City Fire Brigade's 'snorkel' extension platform tired to douse the flames at the top of the building but it was clearly out of control and the roof collapsed before 11pm.
The damaged building was under renovation and was being used by UCC for its Coastal marine research department while an upper floor was being converted for use by the naval service itself.
Hundreds of onlookers gathered in Cobh and other towns around the lower harbour and at one stage there was a traffic jam at the carpark in Cobh which directly overlooks Haulbowline. The fire is still burning as I write but has been brought under control. Luckily there were no injuries and naval service personnel were safe.
Posted by Carrignafoy at 08:18 No comments: 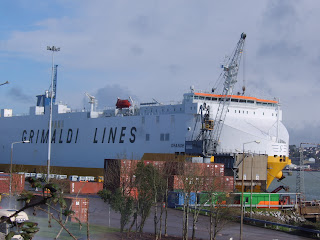 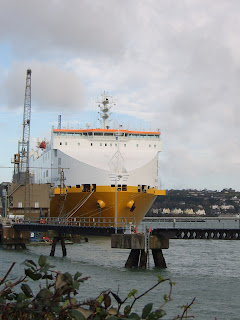 It is now reported that the Grande Scandinavia is fast (aground) on the mud bank and will require further assistance.
Posted by Carrignafoy at 08:15 1 comment:

I congratulate Tom McSweeney of RTÉs Seascapes programme for his forthright views of the run-down of the marine sector by successive Irish governments in this week's edition of the popular weekly radio programme for mariners.

The marine has truly been neglected by Irish governments since the foundation of the state. Nearly a century of independence has done nothing for the maritime community in Ireland but cause it to decline drastically to the point where it has become unsustainable. Many rural communities are literally dying because of this neglect.

In this weeks programme Tom highlighted the virtual disappearance of the Department of the Marine. Once a stand-alone government department with its own minister, responsibility for maritime matters is now spread over three departments. In additon most ministers and very many of the civil servants dealing with maritime matters have had any real empathy with coastal communities, let alone practical experience of living in a coastal community or working at sea.

The decision to close down or drastically downgrade the long-serving coast guard stations at Valentia Island in Co. Kerry and Malin Head in Co. Donegal is another aspect of this government's ignorance on maritime matters.

Seascapes remains one of the best programmes on RTÉ and the strains of Ronald Binge's classic theme music "Sailing By" is heard weekly in many coastal communities and on board boats and ships of all sizes.