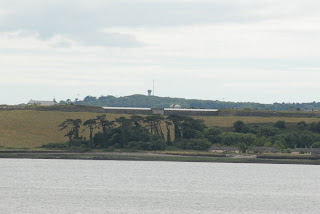 It was encouraging to see a large attendance at the seminar on a Saturday afternoon in August and shows there is huge interest in local history and heritage and people in Cobh and the harbour area are genuinely interested in the future of such places as Spike Island.
Posted by Carrignafoy at 09:07 No comments:

It's been a few weeks since the Old Blog Cabin was updated so I will summarise this posting.

During the week it emerged that the Port of Cork is now looking again at the option of Marino Point near Cobh as the location of the new container terminal for the port. There seemed to be a marked reluctance by the port authority to look at this site when they were initially looking for a location for the container terminal which had outgrown its Tivoli site near Cork city. The former Irish Fertiliser Industries (IFI) site which already has a natural deepwater basin came on the market after IFI was closed down some years ago and could have been bought at the time. To buy it now would cost a lot more. Ringaskiddy is not completely gone as an option but the lack of a rail link may prove to be an insurmountable obstacle. We will watch for further developments with interests.

There are a number of cruise liners coming to Cork Port over the next week or so. Le Diamant is currently at Cork's North Custom House Quay while Century is due in Cobh in the early hours of tomorrow morning to be followed by the enormous Independence of the Seas making her third visit to Cobh on Saturday while Artemis visits the following Friday, 29th August.

On a sad note I would like to pay tribute to my friend Denis O'Connor who died suddenly last Friday. Denis was a docker at the ferry terminal at Ringaskiddy and a leading trade union representative in SIPTU. He was also a member of the Workers' Party and many other organisations. He had a strong interest in all things maritime and was a regular visitor to this blog. May he rest in peace.
Posted by Carrignafoy at 08:41 No comments: 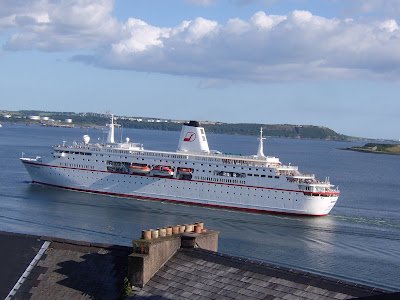 The Minister for Transport Noel Dempsey TD today (5th August 2008) announced a new Harbours Bill that will change the nature of our major port companies, including the Port of Cork, and possibly not for the better.

Up to a decade or so ago the ports were entirely run and owned by the state with boards directly responsible to the Minister. Then they became commercial semi-state, i.e. they became private limited companies with a commercial mandate but still wholly state owned. Many saw this as the first tentative steps towards privatisation. As with other state companies they had been put at arms length from the government and as private companies it would be possible, through further legislation, to decouple them completely and sell them off eventually. Now it seems this privatisation strategy is going a step further with a significant reduction in the number of local authority representatives (in Cork Port company it will go down from five to just one). This will also mean a serious drop in the level of accountability of the harbour boards. It's not quite privatisation yet, but it comes becomes a greater possibility in the medium term.

The new Bill, if passed, would also allow port companies to invest outside their current harbour limits. Another proposal is to extend the harbour limits of a number of port companies to facilitate developments outside existing harbours. Primarily this is to allow Drogheda Port Company in County Louth to develop a new port at Bremore near Balbriggan in north County Dublin. What implications this might have for the Port of Cork vis a vis the ongoing row over the new container terminal remains to be seen.

Obviously one cannot judge a major piece of legislation based only on a Ministerial press release, but I, for one, would have concerns that this is a further step towards privatisation of our ports and if that happens local areas will lose whatever control they have over the development and planning of those ports.

No doubt there are people who will argue that this bill would give the Port of Cork (and the other ports in the Irish Republic) a chance to develop and to invest but there are portends of more negative possibilities. Many people who work in Cork port will remember the Liverpool Dockers Strike of 1995 when the entire workforce of that port was sacked and the port privatised. Liverpool port is now owned by a consortium called the Peel Group which also owns John Lennon Airport, three other airports including Manchester, the Trafford Centre in Manchester and are also involved in wind generation. The company also has involvement in Glasgow port, Clydeport and the Manchester Ship Canal, etc, etc.

There have already been international buyouts of major US ports, could we now see ports like the Port of Cork being owned by multinational companies with no links or loyalty to the region, people, seafarers or port workers? Of course native business interests would also put the bottom line (money) before such considerations. For that reason this blog believes the government should retain ownership of our ports and that local elected representatives should continue to be represented on the port bodies to hold them to account.

The Old Blog Cabin will be looking at this government bill in more detail shortly.
Posted by Carrignafoy at 11:39 No comments: