On Tuesday of this week an important anniversary went by almost unnoticed on this side of the globe at any rate. Friday, 24th March 1989 is a day that will never be forgotten by the fishing communities of Alaska and many places further afield. It was the day the Exxon Valdez went aground in Prince William Sound. A documentary was shown on television last night which revisited the awful devastation caused to wildlife and to the livelihoods of thousands of people.

It is estimated that around 10.8 million US gallons (9 million Imperial gallons or 40.9 million litres) poured into the sea when the Exxon Valdez went aground. This caused devastation on a scale never seen before and hopefully never again. Before the disaster the area was rich with a diverse spread of marine life and an important fishery for the local population.

One of the most appalling aspects of the disaster was the way in which the Exxon oil company, who were responsible for the disaster, used their expensively bought public relations to turn around the situation. They also exacerbated the damage by using large jets of boiling water to clean rocks and beaches. This had the effect of practically sterilizing the area and killing whatever tiny aquatic creatures and seaweed that remained.

Incredibly the Exxon Valdez is still in service and this brings me back to my pet subject - the outrage of Flags of Convenience. The Exxon Valdez is now known as the Dong Fang Ocean and carries metal ore rather than oil but the fact that this ship is still in service at all is very disturbing. After the disaster the ship was patched up and remained in service, undergoing a number of name changes along the way - you know the type - where Windscale becomes Sellafield or Long Kesh become HMP Maze. Well the Exxon Valdez is still plying the high seas under a flag of conveniencee - in this case Panama. Thankfully she is banned from European Union waters because she doesn't have a double hull - something only brought in after the Exxon Valdez disaster.
Posted by Carrignafoy at 12:33 No comments: 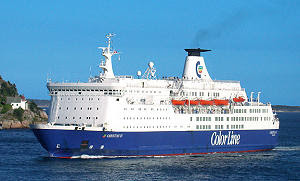 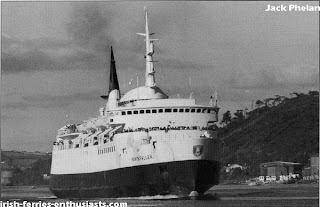 Photo Innisfallen (No.4) passing Carrigaloe on her outbound journey. Pic from Jack Phelan via Irish Ferries Enthusiasts website.
Posted by Carrignafoy at 11:50 No comments:

I have been looking at the provisional list of cruise liner visits due in Cobh in 2009 and there are some interesting ships which have not previously visited the port of Cork.

Once again this year there will be over 50 such port visits by some of the world's most luxurious cruise liners which only goes to show that not everyone is worried about the worldwide recession.

The Independence of the Seas will be back in port at the end of August while many "regulars" will be returning including the Jewel of the Seas, Black Watch, Delphin and Deutschland. Without doubt the highlight of the year must be the visit of the Queen Mary 2 which will take place in November. Althouth the QM2 is now over 5 years in service it will be her first visit to Ireland and will be in port on 21st October, just over 12 months after the farewell visit of her predecessor the Queen Elizabeth 2.

Among the other notable newcomers in 2009 will be the Prinsendam of the Holland America Line and Minerva II.

Yet another report is warning of the threat of rising sea levels as icecaps melt at the North and South Poles due to global warning.

In this morning's Irish Examiner a Cork based expert has questioned the wisdom of the development of large scale housing in the city's dockland. Robert Devoy, Professor of Geography at University College Cork is a member of the United Nations' Intergovernmental Panel on Climate Change (IPCC) was echoing the international warning given by learned scientists at a conference in Copenhagen, Denmark earlier this week.

Professor Devoy has said that the cost of remedial engineering such as the construction of a barrage at the mouth of the River Lee would be extremely expensive and counselled against large scale residential projects in areas prone to flooding or which may suffer future flooding, such as Cork's docklands.

The IPCC are warning that the world's oceans could rise by 18 to 59 centimetres by the year 2100 and possibly sooner. If sea levels rise by 1 metre or more it could spell disaster for hundreds of millions of people living in coastal regions worldwide.

Cork City centre already has a long history of flooding dating from the city's early origins on a series of islands where the River Lee meets the tidal waters of Cork Harbour. These islands were reclaimed in the 17th and 18th century but we still receive regular reminders of their history with seasonal flooding in the flat city centre. Further downsteam there may be problems too with significant residential developments along the low-lying areas of the shoreline. Examples include Cobh, Monkstown, Rochestown and even Midleton.

Here is an interesting link to an interactive online map that shows some of the areas which would be worst affected. You can zoom right into any area on the planet for a more detailed view. http://www.globalwarmingart.com/sealevel
Posted by Carrignafoy at 10:05 No comments:

At the end of April 2008 I covered the story of a Cambodian registered ship, the m.v. Defender, which was under arrest in the Port of Cork over the non-payment of crew's wages and general conditions onboard ship. It is deeply disappointing that another crew onboard the same ship is now in trouble due to the same type of problem.

The problem with "Flags of Convenience" has been highlighted on this blog on several occasions and I commend the actions of the International Transport Federation and their local officer Ken Fleming for prompt action in this case. The Defender is owned by a Latvian company named Forestry Shipping. The ship was launched in 1969 and has a gross tonnage of 1,600 tonnes.

The ship's crew have stated that they have not been paid for several months and that there is not enough food onboard for their return journey to Ukraine. Between them, nine crew members are owned almost €80,000. This is almost exactly the same circumstance that faced another crew less than 12 months ago when the High Court ordered the arrest of the vessel.

There is now a real fear that the company may simply abandon this old vessel and its crew in Cork. How is this possible?

UPDATE 28/03/09 - the Defender (what an unfortunate name for a ship with a history like this) is still laid up at John Horgan Quay in Cork city. It appears most of the crew have gone home and there's little sign of life apart from a vehicle belonging to a security company parked on the quay from time to time. There has been silence on the matter from most local politicians and most of the media seems to have lost interest.
Posted by Carrignafoy at 10:06 No comments:

Antarctic explorer Forde to be honoured in his adopted home 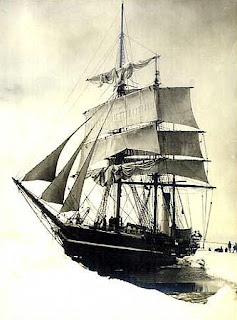 Over the last decade or so much work has been done in reviving the memory of Ireland's arctic and antarctic explorers and names like Ernest Shackleton and Tom Crean have become much more well known.

Cork has its own share of such intrepid explorers such as Kinsale's McCarthy brothers (Tim & Morty) and the present day Dr. Clare O'Leary but the one to honoured next week is Robert Forde, originally Moviddy near Bandon but who spent his last years in Cobh.


A memorial to Forde will be unveiled at the Promenade, Cobh next Saturday, 14th March at 2.30pm. The unveiling will be performed by Jim Wilson who has spearheaded the creation of a formal memorial to the Antarctic hero in his adopted home town.

Robert Forde was born in the rural parish of Moviddy near Bandon on August 29th 1875, son of George Forde and his wife Charity (née Payne). Robert joined the Royal Navy at the age of 16 and eventually rose to the rank of Petty Officer First Class. In 1910 he joined with Tom Crean and others under the command of Captain Robert Falcon Scott to take part in the Terra Nova expedition (Terra Nova being the name of their ship). The expedition undertook an extensive survey of the Antarctic and in 1911 Forde and his companions examined the area around Ross Island and the Polar Plateau. An icy promontory was renamed Mount Forde in his honour. Unluckily, or fortunately as it turned out later, Forde suffered severe frostbite and was ordered home for treatment by Captain Scot. This meant he did not participate on the final and fatal attempt on the South Pole.

On his return home Forde found himself serving in the Royal Navy at the height of the First World War where he served on a number of ships. He survived the war and after demobilisation he returned to Cobh where he was to spend the rest of his life. Robert Forde died in March 1959 so next Saturday's unveiling of the monument in the Promenade will also mark the 50th anniversary of his death.
Posted by Carrignafoy at 10:01 2 comments: