Busy at the Old Blog Cabin

Sorry for the lack of posts on the Old Blog Cabin but I've been busy for the last while and haven't had time to follow up on articles. I haven't heard or seen much on the news front since I haven't had the time to look but one piece of good news I did see was that the Irish government is about to advertise for tenders to raise the national sail-training vessel Asgard II which sank in the Bay of Biscay off the coast of France on September 11th last.

Investigations into the present condition of Asgard have proved to be encouraging and the vessel is said to be "largely intact" following a survey by Remote Operated Vehicle (ROV) recently. Let's hope the Asgard will rise again.
Posted by Carrignafoy at 10:10 No comments:

The Amphicar - an idea lost in time

Start of the Sydney-Hobart Yacht Race, 1971
Originally uploaded by State Library of New South Wales
I spotted this on www.flickr.com this morning and couldn't help posting it. What a great idea! I remember seeing one of these or a similar model around West Cork many years ago when I was a small boy and fascinated with the idea of car that could go on water. I'm sure they can't have been too safe though.

Still it would be very useful for a Sunday afternoon's boating - no bother with trailers, winches, mooring places or winter storage - just drive off to work with it every day and take a dip at weekends!

This one was photographed at the start of hte Sydney-Hobart Yacht Race in 1971 and is from the collection of the Mitchell Library, State Library of New South Wales, Australia.

According to the entry: - "The Amphicar was a German vehicle manufactured 1960-1968. It was the first commercially produced amphibious car and used a Triumph Herald engine over the rear axle to power the wheels and twin propellors. In the water, the front wheels acted as rudders. The body was steel.

From the collections of the Mitchell Library, State Library of New South Wales www.sl.nsw.gov.au


Information about photographic collections of the State Library of New South Wales acms.sl.nsw.gov.au/search/SimpleSearch.aspx

Uploaded by State Library
Posted by Carrignafoy at 10:08 No comments:

For no other reason than indulging in a bit of nostaliga I am posting this Youtube video from the very first episode of the Onedin Line, a television drama series from the 1970s which I remember fondly.

The Onedin Line was huge in the 1970s. The first episode was broadcast in Britain in 1971. I'm not sure when it was first broadcast on RTE (Irish television) but it can't have been too much later. It was also broadcast in Europe, the US and around the world and to this day has a dedicated following. The choice of Aram Katchachurian's theme from Spartacus was an inspired one for the theme music and the intro was a stunning combination of this theme and excellent aerial camrawork. Many people still refer to Spartacus as the "Onedin Line theme"

The series centred on the lives of two brothers James and Robert Onedin, their families and some of the crew of James Onedin's ships. Their father, whom we don't meet, leaves the older brother Robert the family business, a small ship's chandlers shop in Liverpool, while the younger brother James has already gone to sea but is left virtually penniless. Nevertheless he works his way up and marries the daughter of a schooner owner to get his hands on the ship. Eventually he ends up the wealthier of the two brothers, with a fleet of ships. Also featuring in the series are Robert & James' sister Elizabeth and the love interests of the three. Peter Gilmore played James Onedin, while Brian Rawlinson played Robert and Jessica Benton was the strong-willed Elizabeth. My favourite character of the series was the irrepresible Mr. Baines (later Captain Baines), played by Howard Lang with such ease that it seemed like he had been at sea all his life.
The ship shown in the opening credits is the Christian Radich, a full-rigged Norwegian sail training vessel. Several other vessels were also used to double for James Onedin's growing fleet.

I am open to correction on this, but I think the Christian Radich came to Kinsale in the late 1970s while it was taking part in some filming off the south coast of Ireland.
Posted by Carrignafoy at 15:01 3 comments: 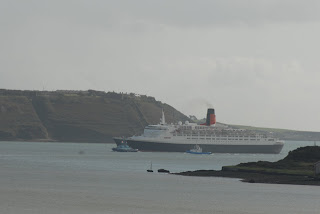 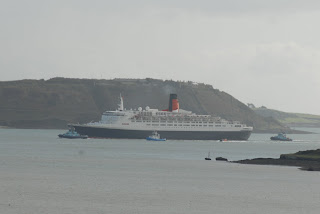 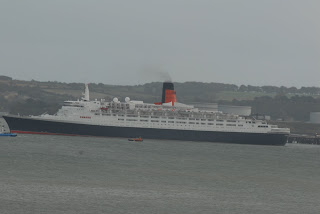 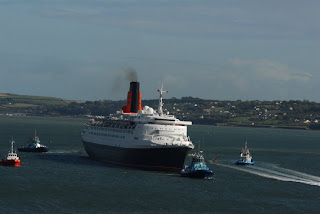 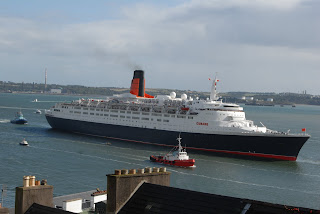 The famed cruise liner Queen Elizabeth 2 has arrived in Cobh this morning on one of the final legs of her farewell voyage after 40 years of service.

The huge liner reached Roches Point at the mouth of Cork Harbour at around 1.30pm and was escorted in slowly by four or five tugboats and a flotilla of boats.

There was even the unusual sight of one of the Dublin Port pilot boats joining the local pilot boat fleet for the occasion.

Here are some photos of the arrival, taken from Cobh town.
Posted by Carrignafoy at 13:49 3 comments:

Are these bullets yours? - Lusitania Ammo owners sought

Nearly 100 years after she was torpedoed and sunk off the Old Head of Kinsale in Southern Ireland the passenger liner Lusitania continues to make the news.

There was an intriguing story in this morning's Irish Times newspaper which revealed that the Irish Receiver of Wrecks may shortly post advertisements in the country's newspapers to determine who owns a quantity of .303 bullet cartridges which have been discovered at the wreck site.

Now it has long been speculated that there may have been munitions on board the Lusitania - the question was even raised while World War 1 was still claiming millions of lives and has continued to cause controversy since. The British passenger vessel was on its way from Liverpool to New York when it was hit by a torpedo from the German submarine Unterseeboot 20 (U-2) some 12 miles off the Old Head of Kinsale on 7th May 1915 with the tragic loss of 1,198 lives. Only a few hundred bodies were removed from the water, over 100 of them are buried at the Old Church Cemetery in Cobh (then known as Queenstown) and the memory of the event is still indelibly written into the town's history.

Whether the Lusitania carried ammunition is no longer in any doubt. More than 15,000 rounds of -303 ammunition has been discoverd over the past few years by divers working for the wreck's owner Greg Bemis. The Cork Sub-Aqua Club have also located ammunition while diving there under licence. Of course this does not explain the mysterious second explosion which is said to have taken place after the torpedo struck and which is believed to have been responsible for the catastrophic loss of the ship. It is still in dispute how this happened although world renowned author and ship surveyor Robert Ballard (who discovered the wreck of the Titanic, another ship with a Cobh connection) believes it was caused by coal dust exploding. Perhaps we shall never really know.

The wreck of the Lusitania itself is owned by Greg Bemis an American who spent many years going through the courts to prove his claim to the wreck. However the Irish government declared the wreck a Heritage Site under the National Monuments Act and it cannot be dived without express government expression (it's a dangerous diving site anyway at approx 100 metres).

According to the Irish Times a sample of Remington -303 cartridges has been handed over to the Receiver of Wrecks in Cork by agents of Mr. Bemis. The Irish Customs service are now assessing the "material" and if ownership is not ascertained in 12 months then cartridges become property of the salvor.

Will the owners of the ammunition please step forward?
Posted by Carrignafoy at 10:47 No comments: