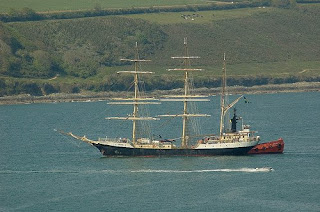 Sweden's largest sail training vessel, the Gunilla is due in Cork next Monday (29th September) for a short visit. Coming so soon after the sad loss of Ireland's own sail training vessel the Asgard II in the Bay of Biscay it will be nice to see a great sailing ship in port again, although not the same no doubt for those who served on Asgard. The Gunilla, 49 metres long and 380, she is a square sailed ship so she looks more like the Jeanie Johnson than the Asgard (see photo). Gunilla was built in Sweden in 1940 and became a sail-training barque in 1997. She was actually originally a motor yacht and is now operated by Den Seglande Gymnasieskolan (the Sailing Upper-Secondary School).

Gunilla will berth at Horgan's Quay near Cork City centre (opposite Jury's Inn and the Custom House).