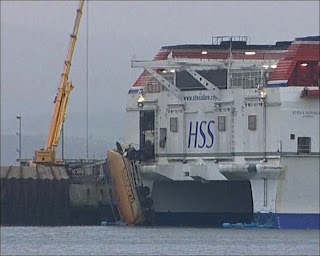 The incident involving a high-speed ferry en route from Stranraer, Scotland to Belfast, Ireland raises some interesting questions. The HSS Stena Voyager is a large high-speed catamaran fast ferry, one of a number of such vessels employed by Stena Line around the UK and Irish coasts. Yesterday (29/1/09) and shortly after the vessel had left Stranraer, a loud bang was heard and on investigation it was discovered that a 35 ton articulated lorry was hanging off the back of the vessel. This was a dramatic enough event which could potentially have destabilised the vessel but it is what happened later that raises questions for me.

According to staff quoted in today's Irish Times, the ship was quickly stabilised and the damage assessed. Luckily nobody was injured and it was clear that the vessel had not sustained major damage and was not in immediate danger. The Voyager returned to the port of Stranraer where it was unable to dock properly and allow its passengers to disembark by the normal ramp at the stern. The large lorry was still hanging there and would have to be removed by emergency services using a large crane. Meanwhile bad weather was setting in.

Since the ramp was not available it was decided to take passengers off using a cherry picker hoist operated by the local fire brigade. With the wind speed increasing it was necessary to remove the passengers one at a time and the entire operation took many hours, leaving some passengers stranded for up to 26 hours.

Now I'm no expert but I would have thought that if this was a conventional ship the obvious answer would be to lower the passengers in the starboard side lifeboats. The ship was in port at this time and the weather front hadn't yet set in. The big question for me is, what would have happened if the ship had been disabled at sea and unable to return to port? But of course the HSS is not a conventional ship - it's lifeboats are not hung from the side on davitts but are behind panels on the side of the vessel, presumably to improve it's aerodynamics and speed. I assume these lifeboats have been approved by the appropriate marine authorities, so why weren't they used? Perhaps it was deemed too dangerous to do this, but it would have been hardly more dangerous than removing people from a ship with a hydraulic hoist in high winds. 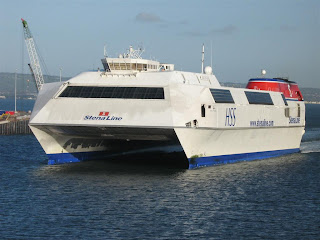