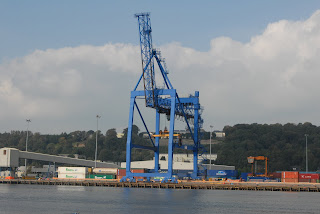 The container terminal at Tivoli, Cork.
The Port of Cork released its annual Chairman's statement yesterday (21/01/2009) amid growing clouds over the Irish and world economy. All in all the port did quite well in 2008 but there was a decline in container traffic and the loss of the Cork-Swansea ferry route continued to hit the region hard.

Throughput in the port for 2008 was 10.1 million tonnes, down slightly from its record 10.6 tonnes in 2007. The biggest decline was in container traffic, decreasing from 200,000 containers to 187,000 (T.E.U.s as they're called in the business - Twenty Foot Equivalent Units). The port company stresses the need for much greater capacity and a move downstream from the overcrowded Tivoli container terminal in Cork city.

The report also shows the strong reliance of the port on the oil and petroleum business, most of it associated with the Conoco Philips Refinery at Whitegate, formerly a state owned concern. Some 5.8 million tonnes of oil and oil products passed through the port in 2008, a decline of 4.5% on 2007.

On the positive side the port is continuing to do well with cruise liner visits with 54 vessels due to call to the Deepwater Quay in Cobh in 2009.

Good news is promised soon on the Swansea-Cork ferry link. Apparently negotiations have been ongoing for some time but have been kept under wraps. We are promised an announcement by April. Not before time!

The question of the container terminal is a vexed one locally. Last year Bord Pleanála, the state planning authority, turned down an application from the Port of Cork for a new container terminal alongside its existing deepwater facilities at Ringaskiddy however the company have reiterated their determination to try again and are looking at a number of sites around the harbour. Ringaskiddy (again) and Marino Point near Cobh are believed to be key target sites.

Many people in the Lower Harbour area are totally opposed to the container terminal being built at any location in the district while residents in Tivoli want it out of there and clearly it has overgrown that site. I will give my personal opinion at the risk of earning disfavour locally. The container business is vital, not just to the port of Cork but to the region as a whole. Cork is the second largest container port in the Irish Republic and has gained enormously in economic terms from this. The rights of people living in the area must be respected and wherever the container terminal is built it must be able to deal with the traffic levels and contain the noise associated with its activities to a minimum. On the other hand there must also be an acceptance that the existing container terminal is totally inadequate and an alternative location must be found. The second biggest natural harbour in the world must afford space to all legitimate users be it ships, pleasure boats, fishing boats, swimmers, wind surfers , etc.

*An anonymous correspondent has sent in a comment (click 'comments' link below) telling me I need to check my facts and stating that Cork Port is only fourth largest in the state in terms of container traffic. The information I carried in the above article comes from a press release from the Port of Cork company which stated specifically "The Port of Cork is the second busiest Port in Ireland in terms of the number of containers handled". Therefore if the correspondent wishes to dispute these figures he / she should do so with the port authority. I would have to agree with the poster about the growing links between big business and the management of the port. Of course the port is in commercial business, but I personally believe the decision to semi-privatise the port was not in the interests of the taxpayers and represents only a move towards total privatisation. I also tend to agree that Marino Point should be central to the port's operations but the rights of local residents must also be weighed up. The port company's decision not to buy Marino Point when it became available was a mistake as indeed was the original decision to establish the deepwater facilities at Ringaskiddy. This was a politically inspired decision as is the move to run-down Iarnrod Éireann's freight section. We are being privatised by stealth.
Posted by Carrignafoy at 10:43

Dear Old Blogger,
Check your facts with the CSO...
For containers Cork is ranked number four behind Dublin, Belfast & Waterford.
Also, Cork does not even have 0.5% of national RoRo Loaded Freight traffic.
The container terminal should be in Marino Point. However, Port of Cork has become a de factor arm of Howard Holdings in recent years and this has clouded all decicions.

Dear Old Blogger,
please do not keep referring to Port of Cork spin as if it was Gospel. Port documents are often just spin from a PR company.
For facts refer to www.cso.ie Port Statistics 2003-2006 Lo-Lo Containers TEUs'000s (twenty foot equivalent units)

Marino Point is reclaimed land circa 100+ acres actually owned by the Port of Cork but leased for 100yrs to IFI! The Port did not buy the site the last time it came up for sale. Let's be honest - the real reason for moving from Tivoli is to let the property developer buddies of the Port of Cork have free reign there.
Regards,
Younger blogger

You see I actually agree with you regarding the move out of Tivoli - or at least the motivating reason behind it - a quick few million bucks for some property developer. These are the type of folks who have bankrupted our country. Just read my blog over the past 2 years and you can see that I'm no mouthpiece for the Port of Cork. However I do not agree with the flat-earth crowd that would rather that there was no commercial traffic in the port and that it would be the sole reserve for luxury yachts and millionaires.

By the way, the name of the blog is The Old Blog Cabin - that does not imply that I am an octogenarian. I started the blog as something else and it soon evolved into a maritime blog.